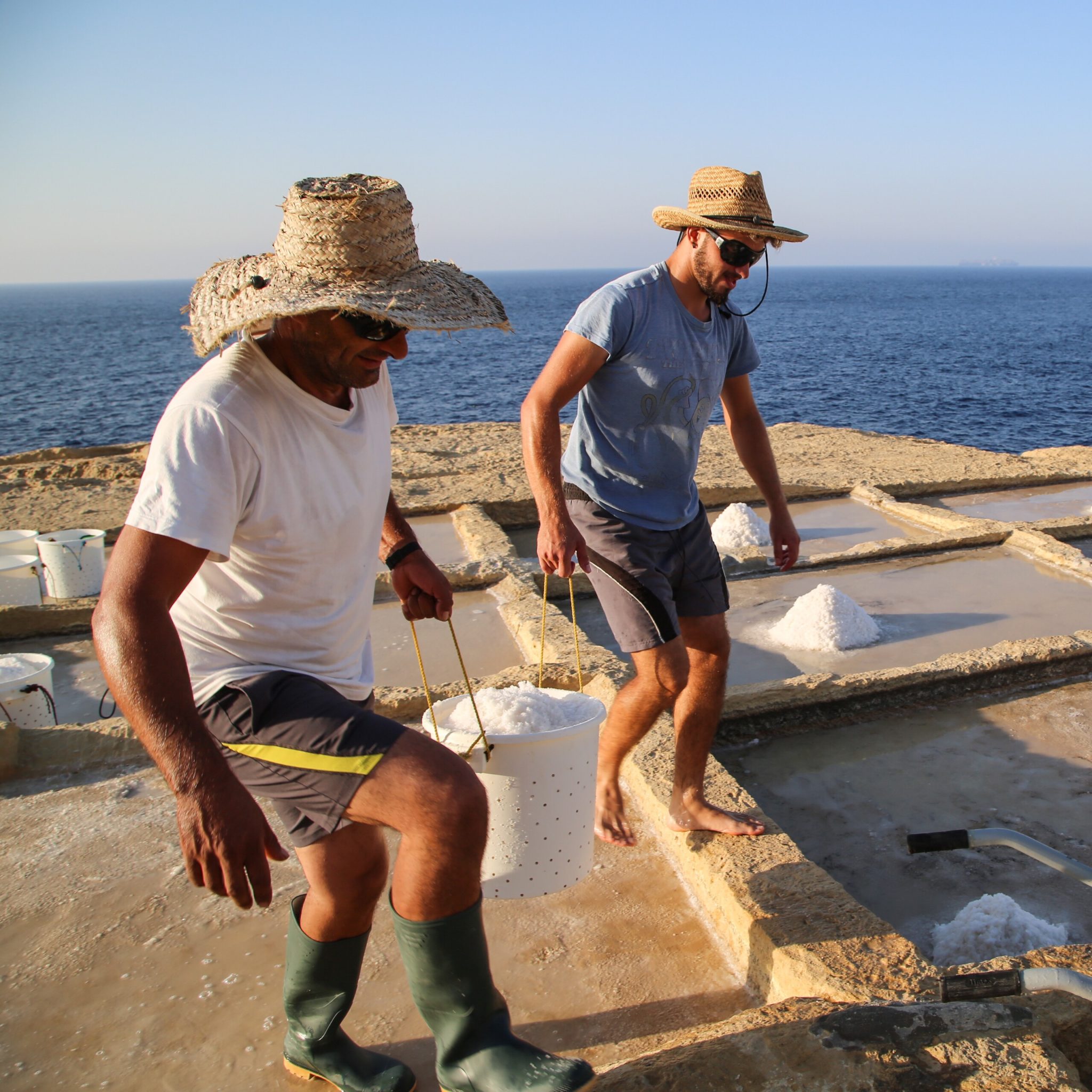 Gozo, ever heard of it?

The rock in the middle of the Mediterranean is the little sister of Malta and home of my mother. Long before my active memories, I have been able to collect taste experiences on the island. Tastes that immediately create a vacation feeling!

But the island’s culinary treasures are not served on a silver platter. Not because the Gozitans want to keep their local delicacies a secret from tourists, but …

The island’s delights are plentiful, but simply not specialties for the islanders, who number a good 30,000. Only recently they are discovering the culinary value of their products. Meanwhile, some tourist shops even offer delicacies from Gozo in (more or less) appealing wrappings.

But the true taste of Gozo is hidden on the shelves of small traders and in the assortment of vegetable hawkers on the roadside. I’ve just been to Gozo again and brought back five tastes that you have to try:

The salt pans in the north near Xwejni Bay are among the most wild romantic places in the world. Already the Romans have prospected the white gold there and until today Gozo salt is harvested and processed in the old Roman way. The salt is – in my opinion – one of the best in the world. It has a mild mineral taste and the consistency is uniquely soft. On steaks or fillets, the flakes melt like butter.

Tip: Since it’s too moist for conventional salt mills, I just keep mine open in the mortar.

On the coastal road along the Salt Pans you can buy the sun-dried sea directly from the salt farmer and thus also support the sweaty craft. While a 400-gram package costs around 1 Euro in the supermarkets, you pay a little more directly at the salt farmers place. In return, however, you can learn everything about salt production on Gozo and, with a little luck, even watch the salt harvest.

Note: If the salt looks somehow „dirty“ and not bright white, this isn’t a cause for concern. In fact, on the contrary! This is rather a seal of quality and authenticity of the Gozo salt.

Pastizzi are crispy airy puff pastries filled with either ricotta or spicy, chopped peas. The pastry (one piece usually costs around 25 cents) is typically served for breakfast in most eateries on Gozo – and, of course, on the main island of Malta. After 12 o’clock, therefore, pastizzi are usually sold out.

By the way, the hearty snack taste best hot. And they’re also pretty yummy with a local Cisk (Malta’s No. 1 beer brand). My tip for those who want to sleep longer or don’t necessarily want to drink beer for breakfast: Just get some Pastizzi from a village bakery – here you can usually buy them until evening.

Everyone who has a sheep or goat on Gozo manufactures them: small wheels of cheese called Ġbejniet. Creamy fresh and similar soft as ricotta, they are served in soup or stuffed in ravioli or enjoyed on bread. Pickled in local vinegar and garnished with a good amount of pepper, however, I like them best. Add a few tomatoes, some olive oil, capers, onions and a glass of red wine – and you will experience happiness. That’s what vacation tastes like!

And you can even take the taste back home: In the chilled shelves of larger supermarkets, you’ll find the cheese sealed in flight-friendly plastic. But the real original Gozo Cheese is best bought at the vegetable stalls at the roadside or at the counters of the small village traders.

Eatery tip: In the rustic restaurant Ta‘ Rikardu on Cittadella (Victoria), Gozo Cheese is served just like the locals do at home.

The Lampuki is a species of mackerel and THE national fish of the Maltese Islands. From mid-August to the end of December, the schools swim past the islands on their way to the Atlantic and have just at this moment the optimal dining size. Whether steamed, grilled, fried or baked – the firm, white meat is tasty and yet pleasantly mild.

Truly every family has its own Lampuki (secret) recipe, handed down through generations. The most traditional way to serve the fish is the Torta tal Lampuki. Unfortunately, I have not yet discovered this delicious fish pie in a restaurant. But ask around when you meet islanders – they’ll be proud to serve you a Lampuki Pie made from their very own family recipe.

Either you hate the pop or you love it. I, on any account, LOVE Kinnie! Even as a kid, I was crazy about the refreshing sugar brew, whose sweet, bitter taste is actually more suited to adult taste buds. Since 1952, the amber-colored fizzy drink has been produced exclusively in Malta and is the Maltese answer to Coca-Cola. Kinnie gets its distinctive taste and ultimately its name from bitter oranges of the Chinotto type – and all sorts of herbs. Kinnie tastes best iced and is the first thing I treat myself to on the ferry from Malta to Gozo.

Of course, this is only a small selection of the tastes of Gozo. And there are a number of really recommendable restaurants beyond the usual tourist places. Soon I will certainly write the next episode of my island Must-Tastes.

But if you need some tips beforehand, feel free to contact me …

I‘ ve been writing about restaurants in Leipzig and Hamburg on my blog for a long time. Since I left Germany in the summer of 2020, I am traveling the world mindfully and now report on my culinary discoveries around the globe.