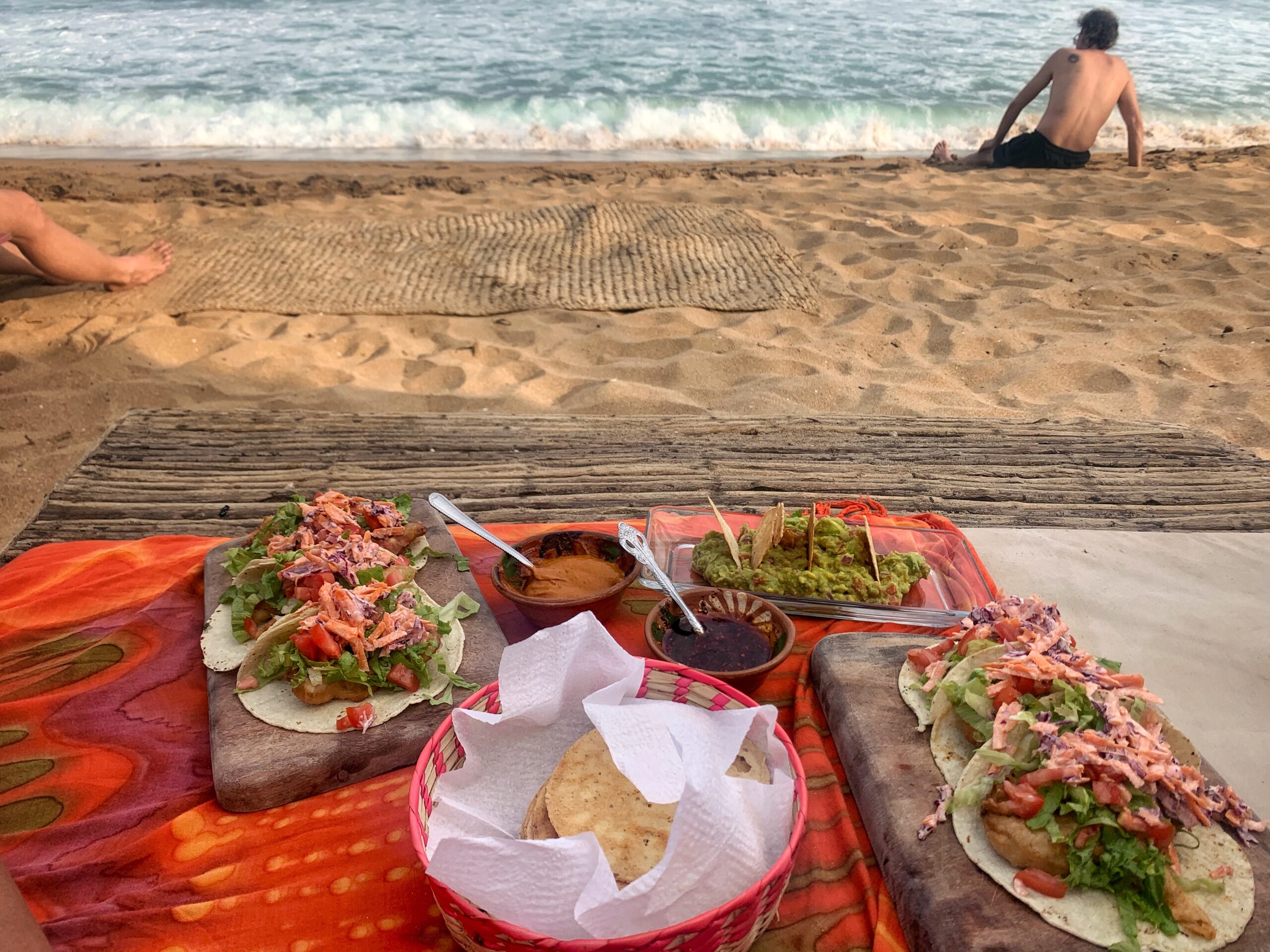 Does yoga work as a compass of taste? Absolutely yes! After I had already enjoyed really tasty food in San Marcos (Guatemala), I was pleased to discover that the chefs of Mazunte (Mexico) also create very delicious food in their kitchens – and yoga guided me to both places …

As in San Marcos, my taste buds go into overdrive the moment I arrived in the hippie town of Mazunte: There’s the smell of homemade bread (also available in gluten-free versions, of course) and hand-roasted „artesanal“ muesli in the air. Homemade ice cream (often vegan, occasionally sugar-free) beckons on every corner, and of course there are fish tacos everywhere in the village on the Pacific (I’ll tell you where to find the best ones later in the text).

Every café, every restaurant along the gravel roads and sandy paths I wanted to visit immediately. But I didn’t succeed even after several weeks. When there is no breeze in Mazunte, the heat is brutal. Even the ocean gives more of a bathtub feeling rather than refreshment. Adapted to the temperatures, life in Mazunte moves slowly – and the great hunger remains absent.

So let’s start with the yoga spots of Mazunte, before I serve you my favorite eateries.

Already many years ago, people seeking tranquility as well as yogis discovered the coastal village in the state of Oaxaca. Barefoot is still the fashionable footwear, and asanas can be practiced on literally every corner. Many hotels have private yoga instructors, but you can also practice under guidance at the large marketplace, and those who follow their own routine are in good company on the beaches of Mazunte. Here the yoga mats are unrolled for sunset.

The following studios are the most famous in Mazunte, accessible to everyone and offering classes for all levels in a variety of styles:

Tip: Casa Om and Hridaya (as part of a retreat) have accommodations at fair prices.

Let’s move on to my favorite restaurants and cafés in Mazunte and the neighboring San Agustinillo, a little village that consists of little more than a main street. But it has a beautiful beach, which scores especially with a number of yummy restaurants.

Watch out in the waves: The current on ALL beaches in the area is quite powerful!

At Maralto Cafe the bakers work their magic to create some especially tasty pastries. I even claim that the best cinnamon buns and the crunchiest breads in Central America come out of the oven in Maralto. And it is getting even better:

The artisanal breads are not only served with plenty of toppings by friendly waiters, the coffee there is also decidedly aromatic – which (for whatever reason?) is not a given in Central America.

Breakfast is also good here: Café Luz del Sol on the outskirts of Mazunte serves up exclusively vegetarian or even vegan, and Umami (photos) impresses with a large selection of smoothies and bowls.

By the way, all three cafes are only open during the day and none of them accept credit cards.

Beach Bar of my Heart

At Casa Corazon on the beach of San Agustinillo I spent most of my time beyond the yoga mat. On comfy (free) sunbeds and with a margarita in my hand, I quickly frittered away an entire day here – and not only sometimes I even stayed on my lounger until late in the evening.

Because of the high temperatures, I not only sipped margaritas, of course, but enjoyed gallons of soda with ice cubes and red berries – the stuff was not only super tasty and refreshing, but also much more manageable in the long run than the high-proof cocktails. Most of all, though, my appetite for fish tacos kept bringing me back to Casa Corazon; the fish deep-fried in delicious batter, complete with smoky sauce, was exactly to my taste.

Last but not least, these ingredients have made the Corazon a perfect beach bar too: The wifi was always stable, in the evenings you could dance to live music, the waiters were attentive and the espresso was really good.

In the Mood for Italy?

Then off to the Lodeli – here real Italian delicacies are served up! For example, fluffy light puff pastry toastini, delicious fruit or chocolate tartlets and the cheese you can not only enjoy accompanied by a well-tempered red wine, but also take home right away. In fact, the cheese counter is one of the most delicious I found on my trip through Central America.

Although Lodeli is a bit more pricey than most other restaurants in Mazunte, when your appetite for Europe hits, Lodeli is probably one of the best places to eat along Mexico’s Pacific Coast.

So far, yoga has worked reliably as a compass of taste. After all, in search of beautiful yoga spots, I have already twice ended up in places that have delighted my taste buds with a variety of delicacies. Let’s hope it stays that way. Because: My journey continues …

How to get to Mazunte?

I‘ ve been writing about restaurants in Leipzig and Hamburg on my blog for a long time. Since I left Germany in the summer of 2020, I am traveling the world mindfully and now report on my culinary discoveries around the globe.